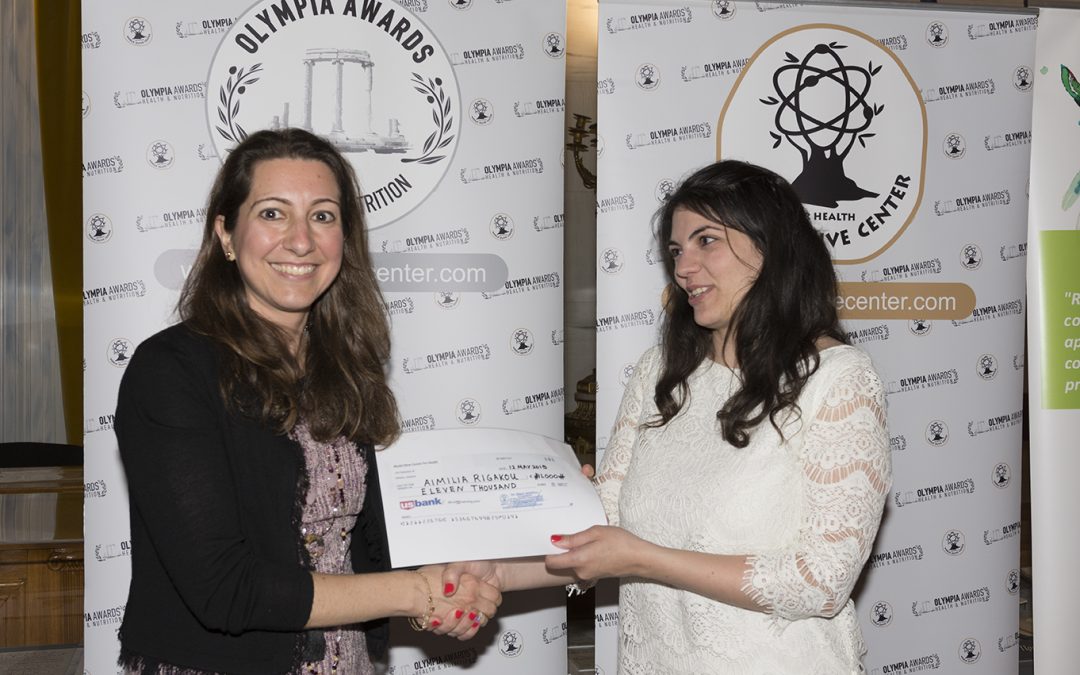 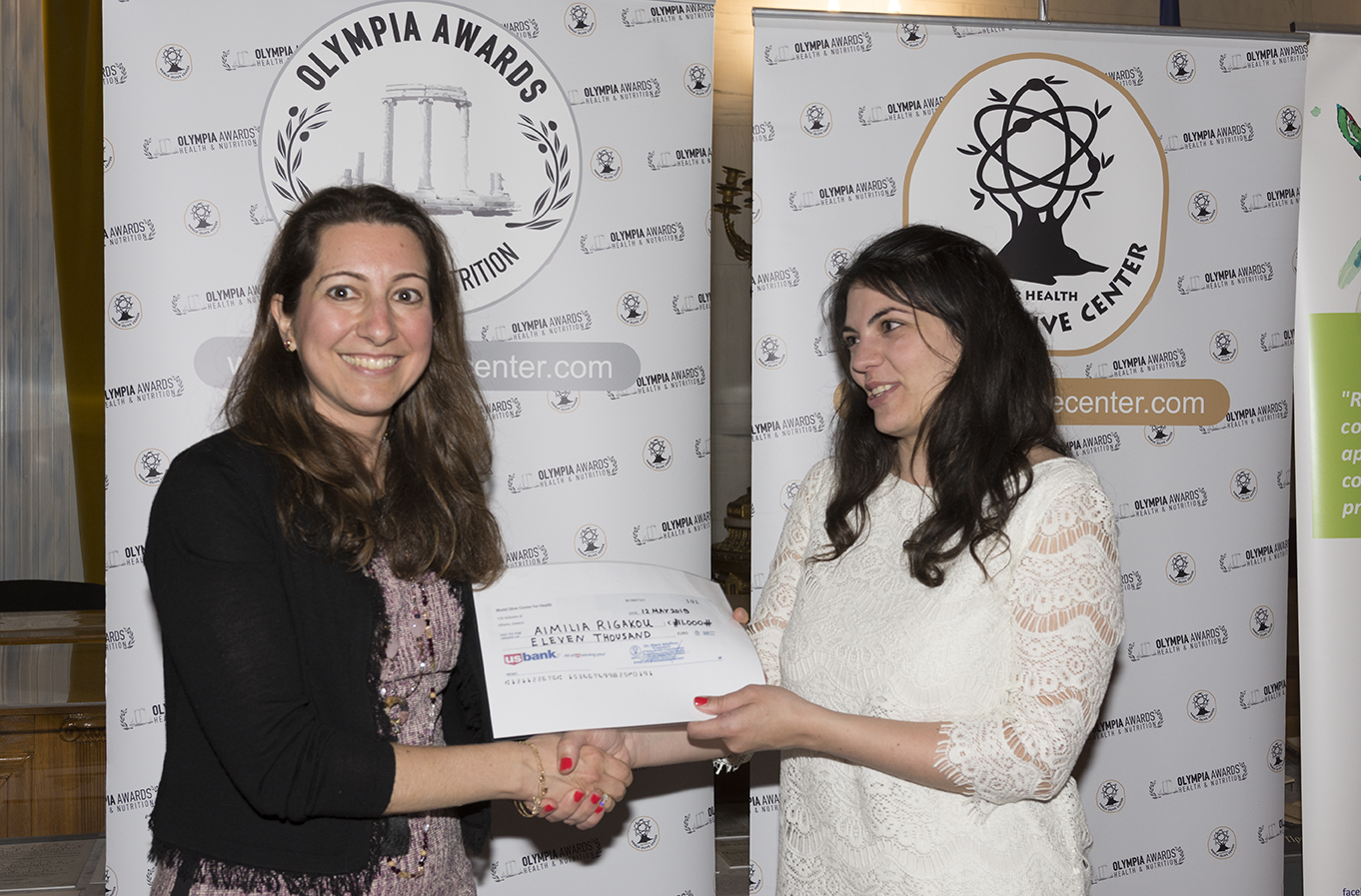 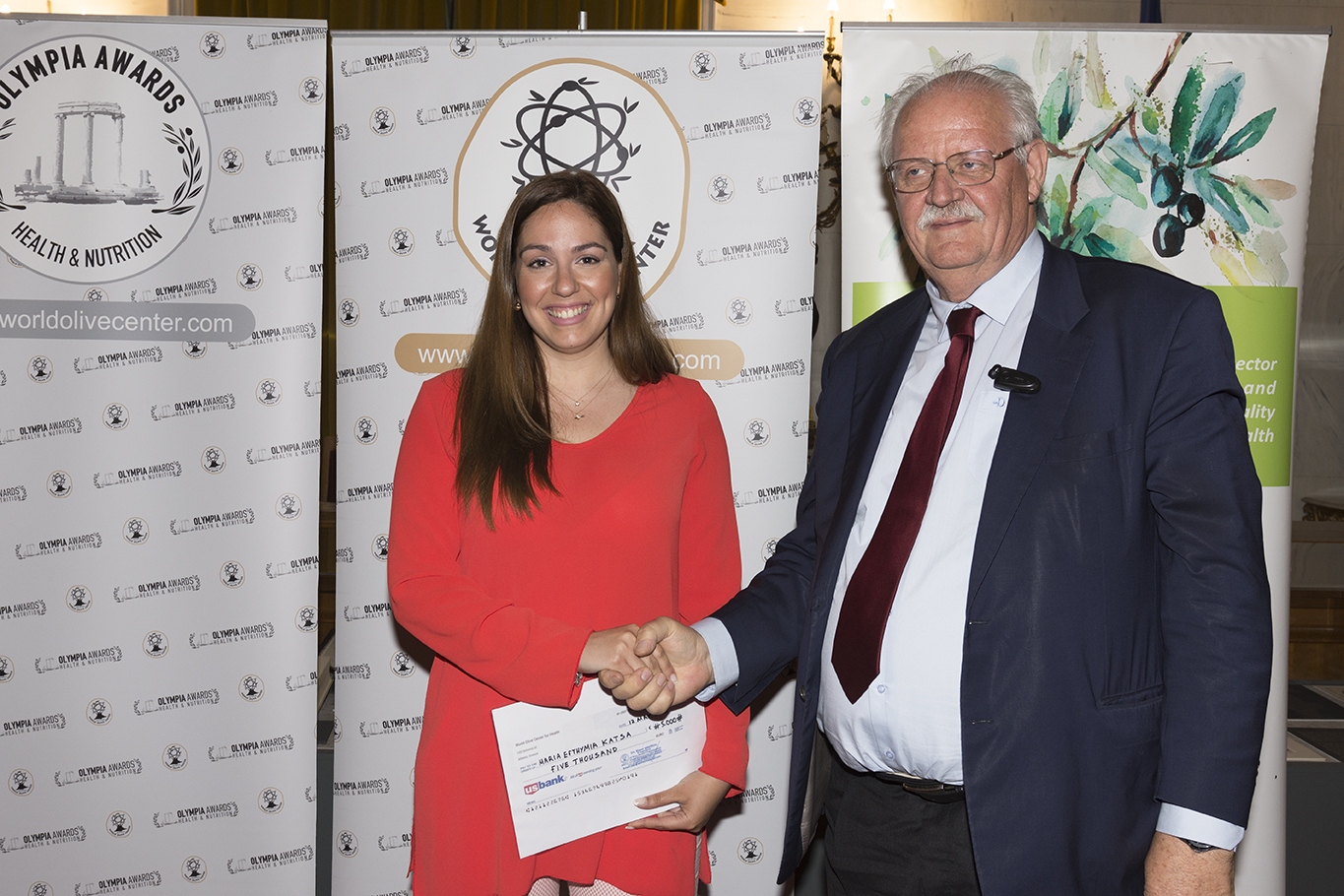 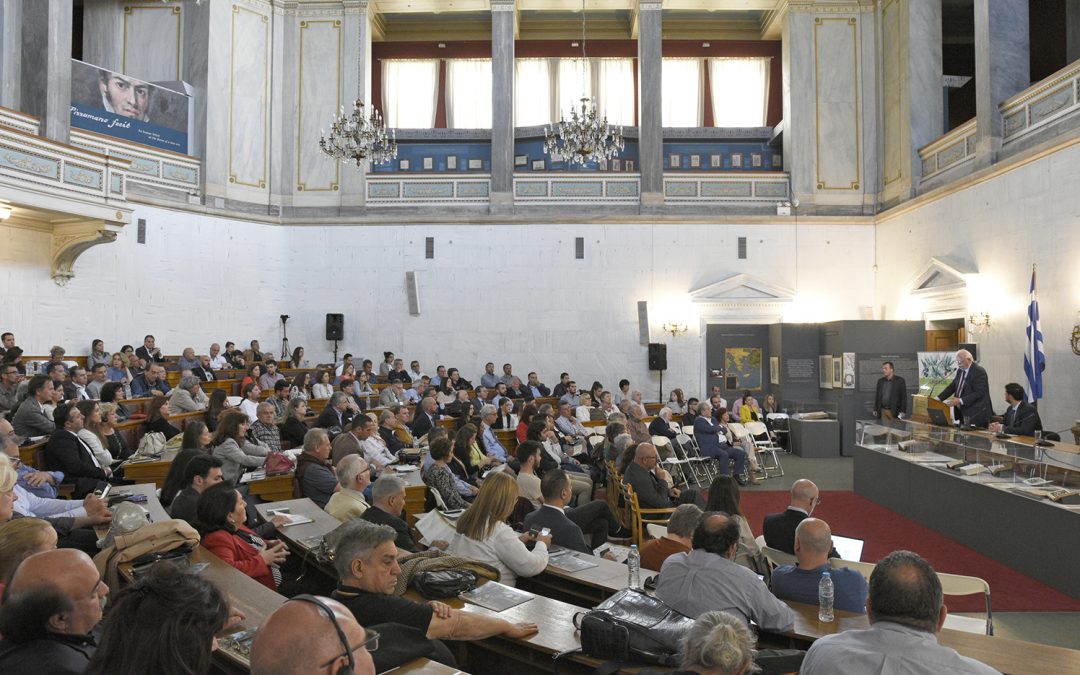 The Olympia Health & Nutrition awards were awarded at a special event held in the Old Parliament on 12 May 2019 organized by the National and Kapodistrian University of Athens and the World Olive Center for Health (WOCH), a nonprofit organization, having as mission to raise financially the whole olive sector internationally.

The award ceremony took place in the framework of the events of the European program INTERREG MED “ARISTOIL”, in which Greece, Cyprus, Spain, Italy and Croatia participate under the scientific supervision of Professor Prokopios Magiatis and which is coordinated by EGTC “Efxini Poli” with the cooperation of the Region of Peloponnese.

It should be noted that the awards are given solely on the basis of the concentration of the health protective substances of the European Health Claim Regulation and are awarded to producers for their care for the production and promotion of olive oil as a product for the protection of human health.

In parallel, more than 300 producers and scientists attended very important scientific announcements on the results of experimental and clinical trials with high phenolic olive oil, while the coordinator of the ARISTOIL project Dr. Krimnianiotis announced the creation of the Cluster of MED Health olive oil.

For the first time, very important results from two American universities were announced regarding the action of high phenolic olive oil and its active ingredients, in particular oleocanthal, which showed that they can inhibit the progression of Alzheimer’s disease and breast cancer in experimental animals while it has been shown that they can be used in synergy with classical drugs with even more positive results.

The high phenolic olive oils that were used in the clinical studies in the US and Greece were selected among thousands of samples by the University of Athens and the team of Professor Prokopios Magiatis. All studies were funded by donors through the World Olive Center for Health.

In the first study, performed under the supervision of Professor Magda Tsolaki in Univ. of Thessaloniki, Chalkidiki early harvest oil with a high phenolic content (donation from Ioannis and Evi Prodromou, YIANNIS) showed that it can reduce certain categories of symptoms in patients with mild cognitive impairment (precursor stage of Alzheimer’s disease) after daily consumption of 40 gr for almost two whole years, compared with the control group that did not receive any specially selected olive oil. Already from the first year of the study, the results of which were announced last year, it has been shown that high phenolic olive oil provides protection to the central nervous system confirming the studies conducted in experimental animals at various universities around the world.

In the second study, performed under the supervision of Professor Rojas (University of Peloponnese), olive oil rich in oleocanthal from the Lianolia Corfu variety (donated by the Dafnis family, The Governor) was given for a period of three months up to 1.5 years in a total of 30 patients with chronic lymphocytic leukemia or monoclonal gammopathy of unspecified significance at such a stage of the disease that chemotherapy was not yet necessary. The striking results showed a decrease or stabilization of white blood cells, a specific death of cancer cells and a fall in cancer markers in a significant number of patients. At the same time, olive oil improved a series of biochemical indices without any negative effect on patients. This year’s results confirmed the initials announced last year in a smaller number of patients and give great optimism for the future. This is the first time that there are so strong indications about the healing properties of high oleocanthal olive oil in oncology patients and not only in experimental animals.

In her closing speech, the president of the World Olive Center for Health Dr. Eleni Melliou, emphasized that there is now a major change in the way the international scientific community faces the beneficial properties of high phenolic olive oil for health. It is of course necessary to continue in Greece and the USA the studies that have begun and invited the hundreds of producers who attended the ceremony to support the financing of the clinical studies through the non-profit organization, while at the same time announced two special scholarships to PhD students to support research through funding from the Leventis Foundation and one scholarship from LIVA SA. 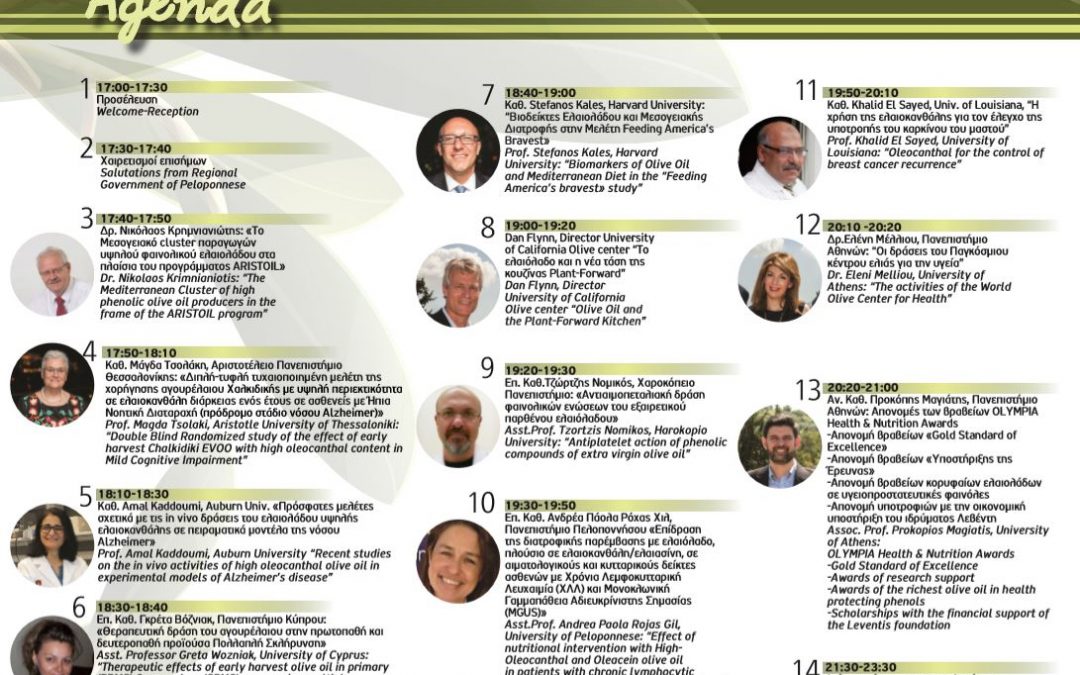 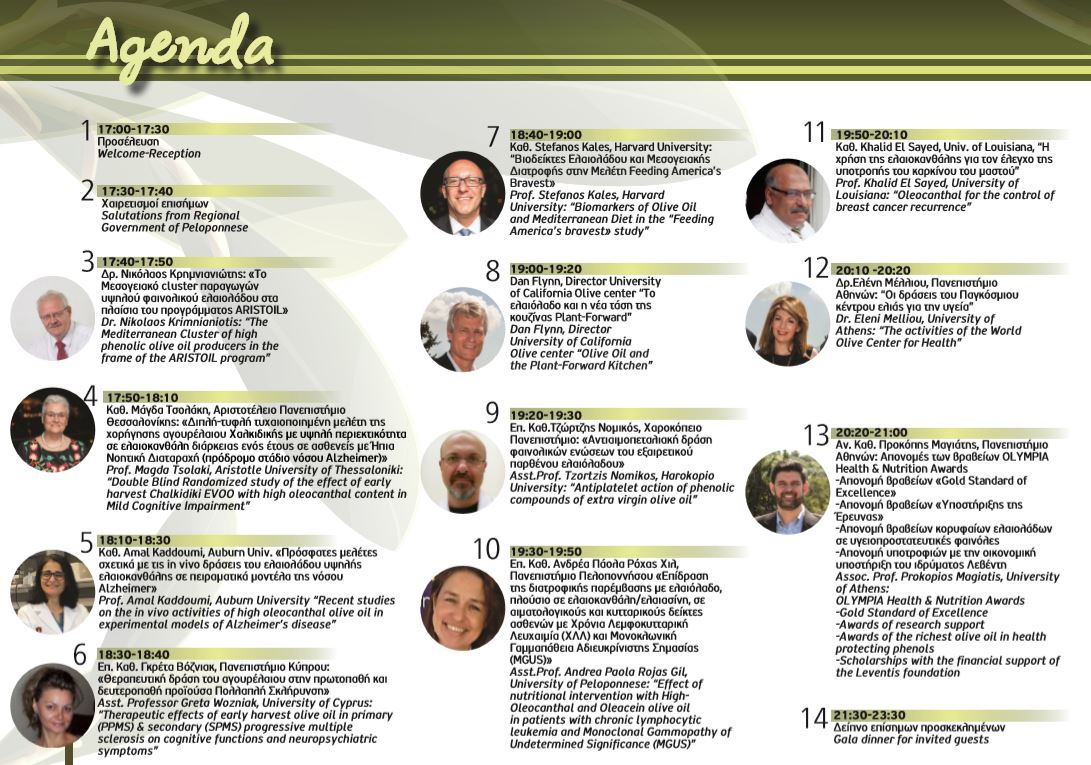 Scholarships Announcement with the support of the Leventis Foundation. Deadline 15 April 2019

The World Olive center for Health with the financial support of the Leventis foundation announces two annual scholarships. PhD candidates from Greece or Cyprus can apply until 15 April 2019. The candidates should provide to the scientific committee of the World Olive center for Health their detailed CV and a description of their scientific project related to olive oil and health. The commitee will announce the recipients of the two scholarships during the Olympia awards ceremony, 12 May 2019. The annual scholarship amount is 11,000 euro for each PhD candidate. For more information you can contact the WOCH at info@worldolivecenter.com

For 4th consecutive year we have the great pleasure to welcome you to the annual ceremony of the Olympia health & Nutrition awards, organised by the non-profit Organization World Olive center for health, the National and Kapodistrian University of Athens, EGTC EFXINI POLI  and the partners of the ARISTOIL project.

The Olympia Health and Nutrition Awards 2019 ceremony date is the 12th of May 2019. The ceremony will take place at the Old parliament building in Athens. The ceremony will be combined with scientific announcements of recent results of the ongoing experimental and clinical trials with high phenolic olive oil. 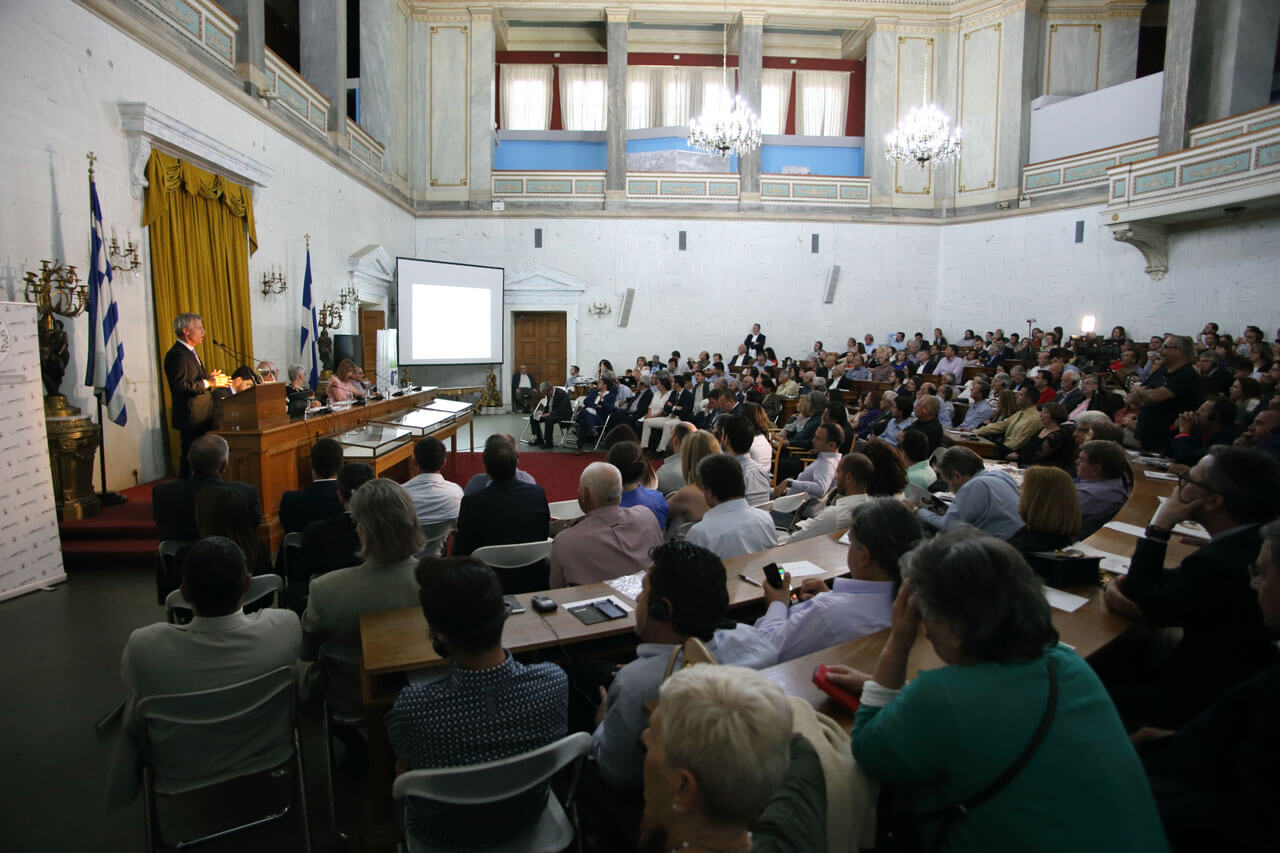 Memorandum of collaboration with the UC Davis olive center

The World Olive center for Health announces has agreed a Memorandum of collaboration with the University of California- Davis Olive center. The aim of this collaboration is to join efforts for the scientific proof of the health benefits of high phenolic olive oil.

« Older Entries
We use cookies to ensure that we give you the best experience on our website. If you continue to use this site we will assume that you are happy with it.OkNo